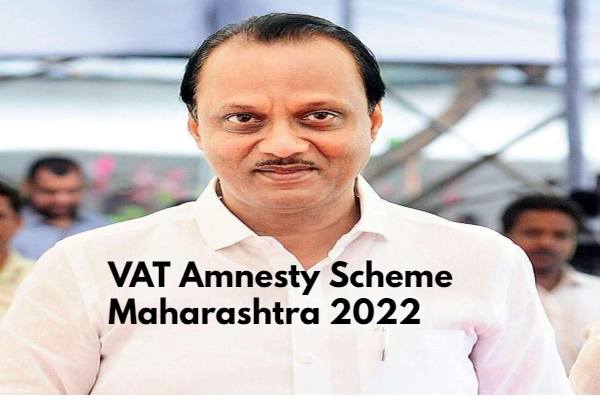 Maharashtra Vat Amnesty Scheme: The Deputy Chief Minister of the finance and planning department introduced a new scheme for the GST department named Amnesty Scheme 2022. This scheme was introduced during the announcement of the annual budget 2022-23. The Maharashtra Settlement of Arrears of Tax, Interest, Penalty, or late Fee scheme 2022 will be in effect from April 1 to September 30, 2022.

Ajit Pawar, the Deputy Chief Minister of Maharashtra state introduced a revenue-deficit budget. This scheme is proposing an amnesty program for GST payers and a cut in the VAT on natural gas, among other tax concessions. The provision of Rs. 1,50,000 crore has been made for the execution of this annual plan, announced by Pawar, the Deputy Chief Minister of the finance and planning department. Revenue receipts are expected to be Rs. 4,03,427 crore, with revenue expenditure at Rs 4,27,780 crore, according to the budget estimates.

According to this plan, if the arrears are less than Rs. 10,ooo per year, the arrears will be completely waived. In this way, in nearly 1 lakh situations, small dealers will gain. Dealers with arrears of up to Rs. 10 Lakh or less will pay a 20 percent lump-sum online. In this way, about 2.20 lakh cases will benefit medium dealers.

Although, there would be an estimated revenue deficit of Rs. 24353 core. According to the updated estimate, tax receipts for the fiscal year 2021-22 will be rs.2, 75498 crores. GST, VAT, Central Sales Tax, Professional Tax, and other key taxes are included in the updated estimate of Rs. 1,55,307 crore. The finance minister said that an amnesty scheme for GST arrears is dubbed the ‘Maharashtra Settlement of Arrears of Tax, Interest, Penalty or Late Fee scheme. 2022, would be implemented.

I propose Amnesty Scheme, for Goods and Services Tax Department. This Amnesty Scheme will be called as “Maharashtra Settlement of Arrears of Tax, Interest, Penalty or Late Fee Scheme-2022”.

This Scheme is applicable regarding concessions on various taxes levied by Sales Tax Department before introduction of GST Act and duration of this Amnesty Scheme will be from April 1, 2022 to September 30, 2022.
Reduction of VAT rate on Natural Gas Increase in period for adjustment of stamp dutyStamp Duty exemption on Gift deeds without consideration to corporations and institutions.

I am hopeful that all the Honourable Members of this August House will support to my proposals.
Jai Hind ! Jai Maharashtra !!